The Church of Black Coffee

Rambling Sunday Sermon, 3-11-18
At the end of Kurt Vonnegut’s novel ‘Timequake’ Kilgore Trout asks Kurt to find two stars in the sky. He states that the light from those two stars would take thousands if not millions of years to reach each other, or to reach Earth. He then asks Kurt to look “precisely at one, and then precisely at the other.”
Kurt states he has done so and Kilgore asks, “It took a second, do you think?” to which Kurt says it did not take any longer than that. Kilgore responds, “Even if you’d taken an hour…something would have passed between where those two heavenly bodies used to be, at, conservatively speaking, a million times the speed of light.”
The thing that Kilgore Trout is referring to is Kurt’s awareness. This, he proclaims, is a new thing in the world, and one which physicists must take into consideration along side energy and matter, and, it is implied, one which renders the idea that the speed of light is insurmountable obsolete.
There is evidence for the proposition that awareness is a force in the world beyond this, fairly cute, fictitious anecdote. Heisenberg pointed out that it is impossible to, at the same time, measure both the velocity of a thing and determine its speed. Measuring one affects the other. Or is it effects? I never know.
A quark’s position is determined only when it is measured. The quark is not located, or it is potentially located anywhere, until it is observed, and then all of those probabilities but one collapse. I think, my primary reference in regards to quantum physics is The Hitchhiker’s Guide to the Galaxy, so for god’s sake don’t just trust me on this. The point is, though, it does not seem as though awareness is irrelevant fundamentally.
It might be though, let me actually study physics for a decade or so and I’ll let you know. I’m just sayin. Irregawdless it sure isn’t irrelevant macroscopically.
Awareness is hot right now, but it’s got a new name (lingo and jingles make the world go round) “mindfulness”. Be mindful of your breath, be mindful of your anger, be mindful of others. If Kurt’s uncle Alex were alive today he’d tell you to be mindful of when things are good, not just won the lottery amazing, but drinking lemonade in the shade good, and to say out loud, “if this isn’t nice, what is?” Whatever vernacular you prefer, he is right.
Awareness is a tool. It ought to be used to shine light on hate and injustice and cruelty, you could exhaust your whole life’s awareness on these and not begin to be aware of it all. Fine, good, please and thank you. March and protest and vote and call out those people who are fighting against goodness and fairness.
A hammer can be used to tear down a moldy old shack, and it can also be used to build a new one the salvaged pieces. Your awareness can help defeat the racists and bigots in the world, but it can also shine a light on lemonade in the shade.
Your politicians and corporations, in general, want everyone to be afraid and angry. It’s so much easier to campaign off of fear and anger than off of love and kindness. So march and protest and vote, but don’t forgot to notice where things are good, and to point them out as well. Where things are good, they serve as a compass, and so without noticing them and acknowledging them, without being aware of them, navigating the world, determining where we ought to be going, what changes specifically ought to be made to those things that aren’t good, becomes much more difficult.
Do yourself a favor, and do the world a favor, take notice of the good things, too.
Ting a ling! 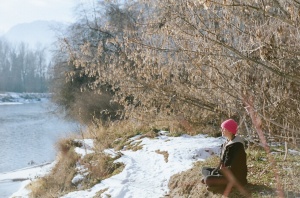